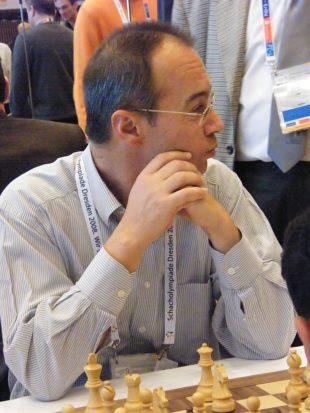 First Name:
Predrag
Last Name:
Nikolić
Date of birth:
11-09-1960
Predrag Nikolić (born 11 September 1960 in Bosanski Šamac) is a Bosnian chess grandmaster. He first competed for the Yugoslav Championship in 1979, taking a share of second place. The following year and again in 1984, he went one step further and became the Yugoslav national champion. He was awarded the International Master and Grandmaster titles in 1980 and 1983 respectively. The GM title was earned from his 1982 performances in Sarajevo (third) and Sochi (second after Mikhail Tal). He was a winner at Sarajevo in 1983, at Novi Sad in 1984 and at Reykjavík two years later. 1986 was also the year that he shared second place behind Nigel Short at Wijk aan Zee. He returned to winning ways at Sarajevo in 1987 and at the Zagreb Interzonal, narrowly failed to qualify for the Candidates Tournament (sharing fourth place behind Korchnoi, Ehlvest and Seirawan).